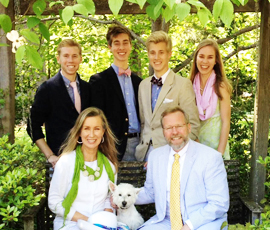 “We had decided before we got married that we were going to home school,” says Nancy Campbell, home schooling mother of four from Anderson. “We had met several home schooling families with children whose character, manners, and social skills we admired very much.”

Since those days, it hasn’t always been easy, but the Campbells don’t regret their decision to home school. Nancy’s encouragement to other parents is “Simply make the best use of what you have available!” She explains, “We didn’t touch a textbook until 6th grade math, we just read out loud together, sometimes for four hours a day.”

While some might find this unconventional, it’s difficult to argue with the results: Their oldest son, Zan, earned South Carolina’s highest academic scholarship, recently graduated from USC with distinction and is now a Navy pilot. Their daughter, Meg, was elected student body president at Anderson University and ranked second in the nation in impromptu speaking. Their third child, McBride, who is now a student at USC, was elected Student Body President of Teen Pact, a national home school organization. And Ian, the youngest Campbell, with two years of high school left, seems poised to follow in his siblings’ high-achieving footsteps.

While Nancy quickly points out that their family was never previously politically connected, she is thankful that the flexible home schooling schedule allowed her to teach her children civic involvement by volunteering on campaigns and holding internships with elected officials.

“Early on, perception was a problem. You always get the socialization question…but we just laugh about that question now.”

To learn more about homeschooling in SC, be sure to check out My SC Education.